On 4th August, I registered for driving test. It was Tuesday and I knew the registration would be open (normally only Mondays or Tuesdays would be open). But I was told that we could, henceforth, register on any day. That was a good news not only for me but all.

However on registration, I was surprised to get the appointment for 15th October 2015. I could not believe it and asked again for confirmation but I was fed with the hard fact that I have to wait for 72 days to give my test. A little waiting in every office is a usual trend but this is longer than anyone can expect. I felt as if I was getting an appointment with the President of the United States of America.

I have to wait until my test day comes (finally) by plying in buses and taxis. Although I know driving, I cannot do it because there is a policy of zero tolerance on non-possession of required documents. Ever more, Fridays have become dangerous for me and I cannot imagine paying fine for ten Fridays for driving without license.

There is this, on one hand, the policy of zero tolerance that demands driving license from every driver. On the other hand, the driving test is limited to once a week (on Thursday) for only 50 people. If those registered are not able to give test sooner, how can they possess the required document? If many do not have documents, how can we expect the number of defaulters to decrease? If defaulters do not decrease, where is the success of ‘zero tolerance’ policy? If hundreds are to be kept waiting, what is the use of opening registration on all days for all?

It is time that something should be done by the concerned Agency. Population in Thimphu has grown and so do vehicles. Is it not time to increase the frequency of tests in a week considering the number of applicants? Or should it stick to the “Thursday Rule” and keep hundreds waiting for weeks and months?

The concerned agency must know that as of today there are 500 people (50 people each registered for 10 Thursdays) driving without license in Thimphu.
Posted by Tempa Gyeltshen at 6:11:00 AM 0 comments

The Supreme Court of Bhutan hoists history by hoisting Lhadhar. More than 50 people from Bhutan Power Corporation and Supreme Court assisted in hoisting the Lhadhar. 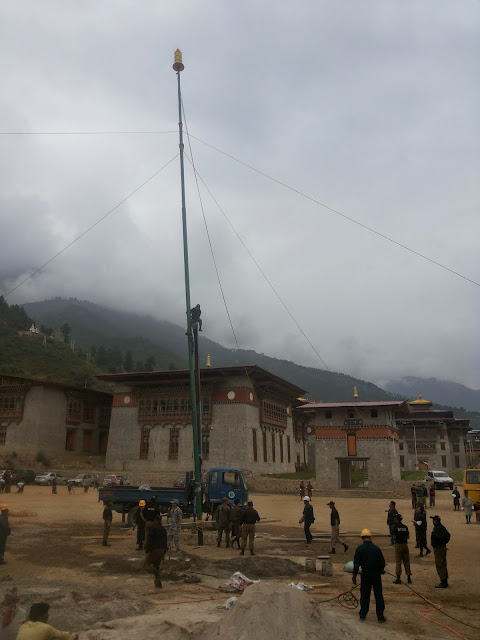 Last evening I was reading some of the documents that I had downloaded sometimes ago. I have a habit of storing documents to be read in the future with the assumption that I would be blessed with leisure hours. I read a few. My most interesting and inspiring reading was about the tiny ants. For that reason, I wanted to share it to my readers.

Ants are such tiny creatures on earth that live with great dreams and preparations. They build castles and celebrate. They fight wars and shed blood. They carry their dead friends on top of their head to show to the world their devotion and loyalty towards a friend. But do we notices these?

I could not stop appreciating their life and their philosophy of living. Reading the piece, I was taken aback to my young days where I spent days watching them work around their castle. However, I had drawn no such inspirations then. Today I find that we can learn great lessons from them.

Ants never quit: If you try to block their way, they look for another way ahead and soon you find them joining the procession. Unlike us, they never challenge the man disturbing them although they have weapons ready. They remain focused to their destination. They are with a mission. They never give up.

Ants think winter all summer and summer all winter: By the mid of summer, you find ants spread wide across in search of food. That’s when they think about the arrival of cold winter. Rather than enjoying the warmth of summer days, they are frozen with the thoughts of winter.  They prepare in advance. It is important to be realistic and think ahead with effective plans.

And in winter, all they do is plan for summer. They remind themselves that winter will not last long. So on the first warm day, they are out. Should they find the weather outside cold, they drive back to their home with the hope that a warm day would come soon. This is how they remain positive all the time.

Do all that you possibly can: How much will an ant gather during the summer to prepare for the winter? All that it possibly can! This teaches us to do all that we can. Not half-hearted but live to the best of our ability.

If a creature like an ant can inspire us, we ought to inspire many with our determination. Never give up, think ahead, remain positive and do all you can.

The Bigger Belts of Our Mountains 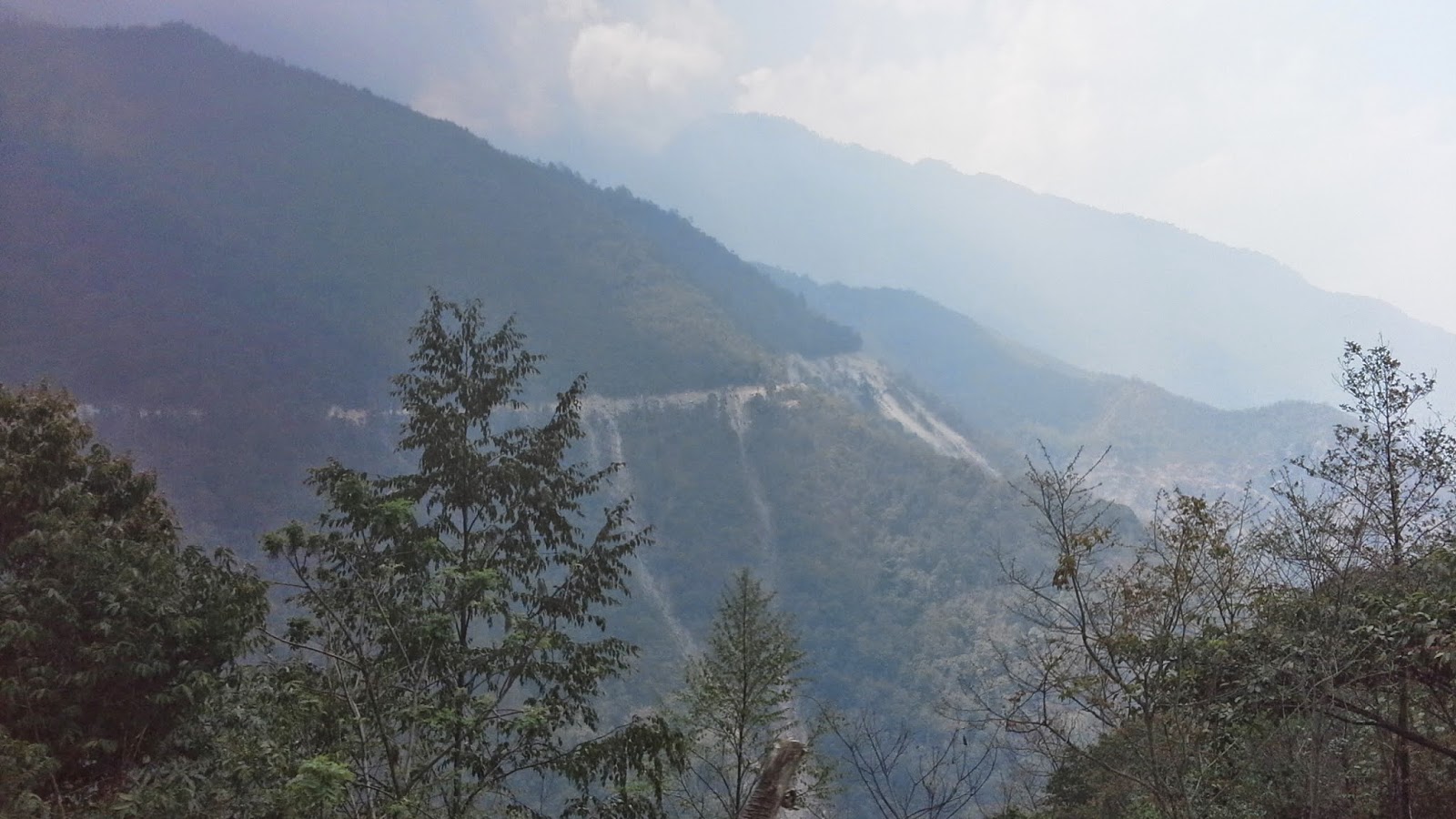 For so long in the evolution history of Bhutan, the Mighty Mountains of Shingkhar Lauri did not have the broad and colorful belts like elsewhere. What they wore at all the times was an old thin stripe which was almost invisible. They watched every man and woman walking on their thin belt with heavy loads on their backs. Even innocent animals they saw were pitifully loaded and parading without a halt in sweats. 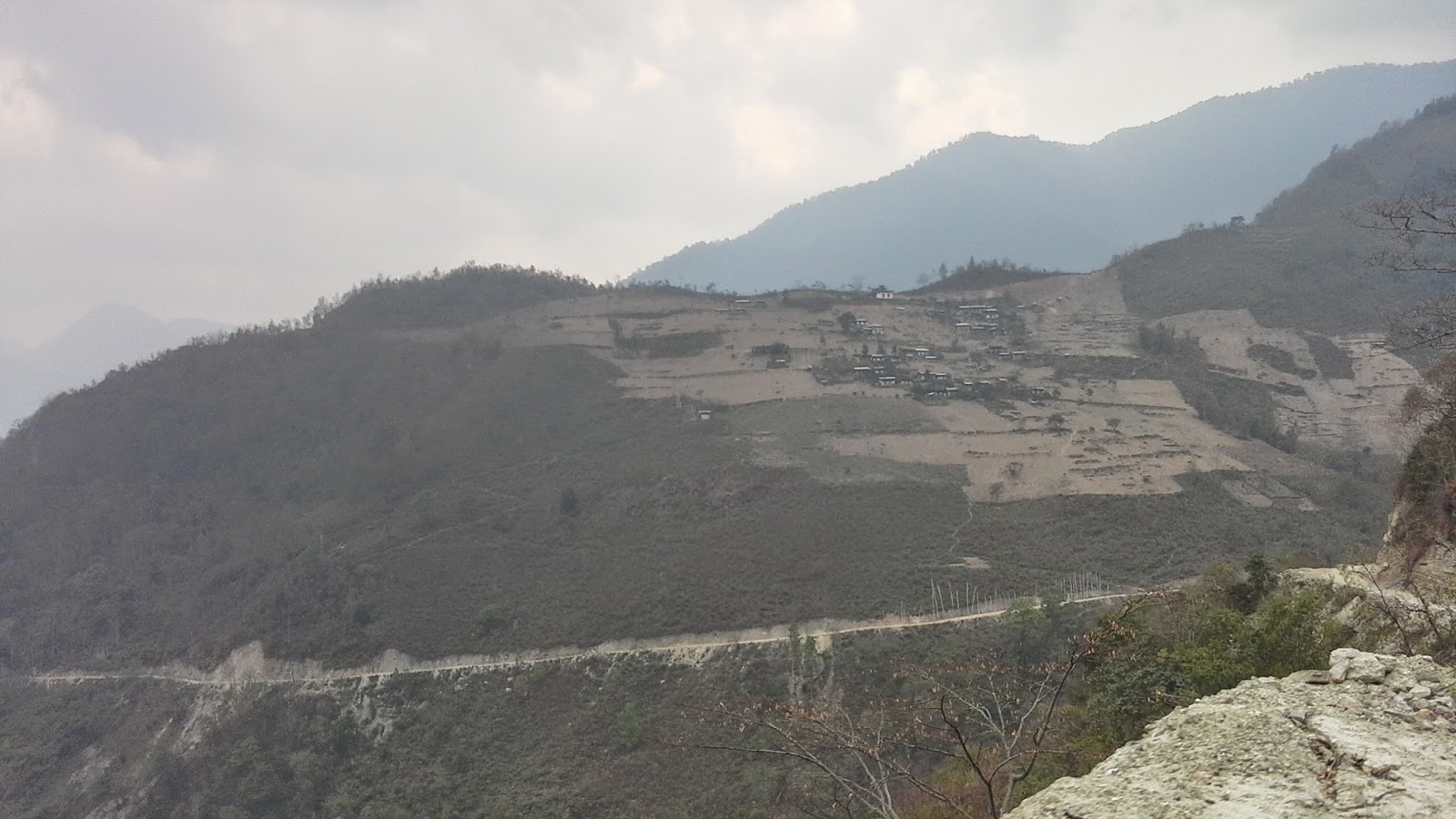 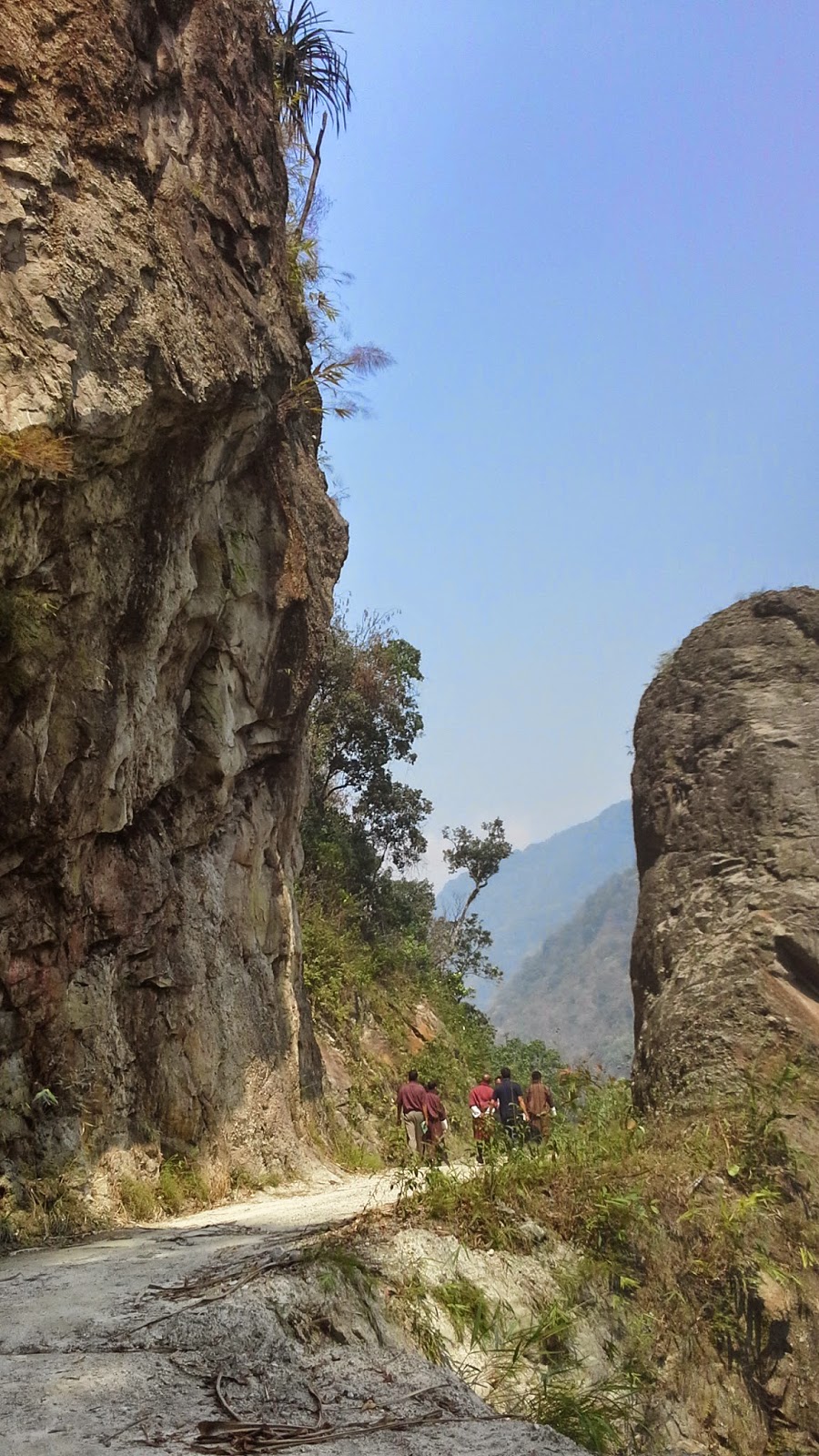 These magnanimous prayers went deeper than their roots, grew firmer than their bodies, and became taller and visible than their heights. The eastern sun on his journey to the west carried the message of their hearty cries. The messenger winds blowing from the heart of these mountains dropped on the center table the letter written and signed by the mighty pen of Memey Tshang Lhari. The rivers meandering at their feet were instructed to cry louder than ever to the ears of the people. Ani Uni, the mountain at the southern foothills, was instructed to wait for the response from the center. The three sisters kept watching for the messenger to come. All of them worked for day and night and today their wishes are fulfilled.

They have got a broad and bigger belt although they have to bear the brunt of pain caused from the cut. They are happy that they see people plying happily in modern box-like animals. They no more see them sweating. They no more carry loads on backs. Innocent mules and horses are freed. Distance has shortened and life has become beautiful.

Thank you, the Mountains of Shingkhar lauri for your sacrifice.

My Journey - Written With Light

I could not update my blog for a long time. I hope I have not disheartened you, my reader. Over the past months, the days had been very hectic for me. I was busy that i did not get a moment to browse.

Unusual to the normal timing, my son woke up early in the morning today. I got up from my warm quilts and pulled him on my laps. He slept again. At this time, I realized that he has woken his father to write something for his blog, which remained dormant for sometime. I pulled my laptop and began to reflect on the past months. Here is the story written with light (photographs). 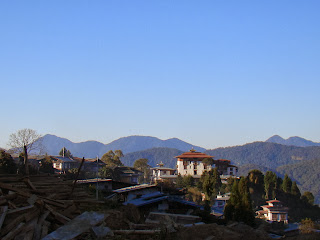 The Dzong is a priority for Zhemgang. It receives the first rays of sun. Raised on a hill, the Dzong looks magnificent and glorious. 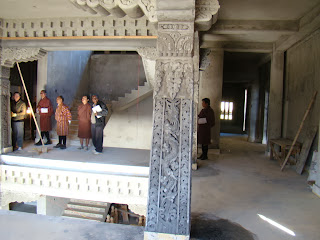 Kachens are curved beautifully using cement for courts. You see a dragon being curved or cut with cements. Life has become easier for carpenters. They use a piece of wood to curve these beautiful image. 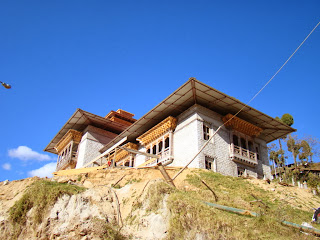 This is Trongsa Court which is under construction. It is built on a hill to give it a panoramic view. 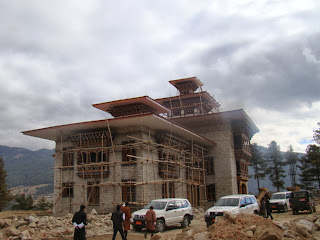 Although delayed, Bumthang Court is progressing well. It stands amid pine trees with refreshing air. Bumthang is a beautiful place blessed with pristine nature. 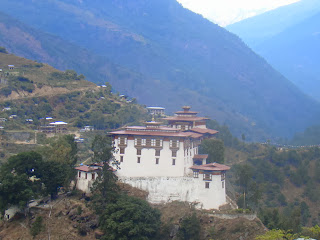 “Lhundrup tsegi dzongchen, Phurdro chagpa drasong…..”. I have heard and sang this song long ago but never been to Lhuntse to see the mighty Dzong. This time I was lucky be there. Although its a rugged place with steep mountains, it is a beautiful place. 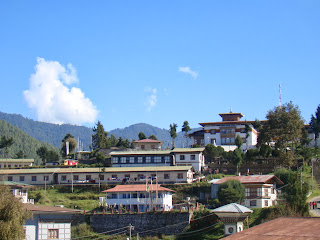 The beauty of nature lies in the beholder’s eye, someone said. Mongar is beautiful for me, especially the geometric arrangement of buildings and nature around. 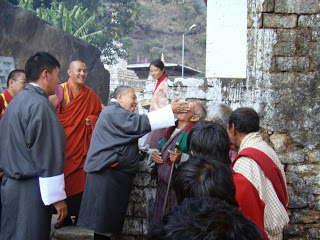 On our way to Tashi Yangtse, we halted at Gom Kora, a sacred place blessed by Guru Rinpoche. We prostrated in the Lhakhang. His Excellency, the Chief Justice of Bhutan gave Jinlap Damzey and other presents to old people circumambulating the Lhakhang. 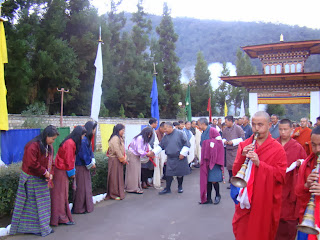 His Excellency the Chief Justice of Bhutan being received by Dasho Dzongda and sector heads of Trashi Yangtse. 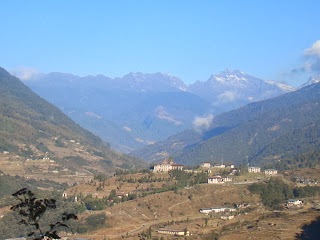 Tashi Yangtse is a beautiful place. With the Dzong located at the center, the whole valley in the surrounding appears beatific. 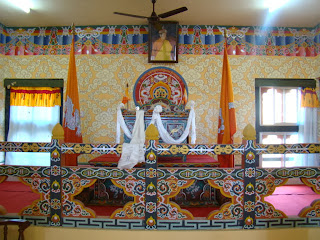 This is the Thri for Dasho Drangpons in the courts. This is in Wamrong District Court. 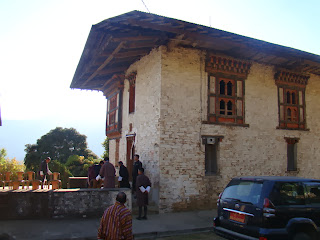 This is the house from where our one and only the Chief Justice of Bhutan, Lyonpo Sonam Tobgye comes from. This is his ancestral house in Pema Gatshel. 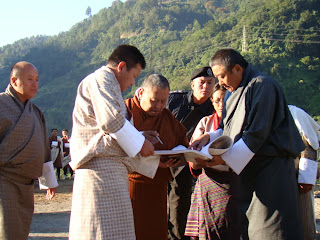 His Excellency the Chief Justice, Hon'ble Registral General, Dasho Dzongda, Architect and others look at the design of the court in Pema Gatshel. 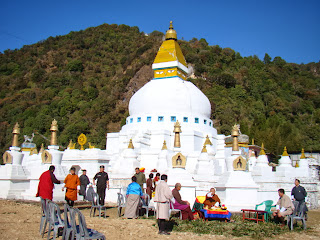 This Chorten is on the way to Khawar Lhakhang in Pema Gatshel. It is a mighty Chorten with immense architectural designs. 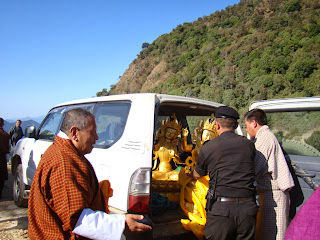 His Excellency the Chief Justice donated two Jampelyang statues to two institutes in Pema Gatshel. They were consecrated near the Chorten by the lama of the locality. 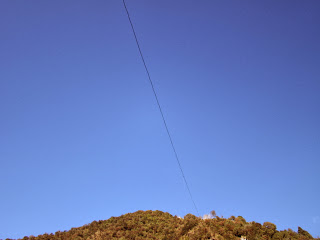 Many may think that this is a telephone wire. It is not. This is a water pipe that is pulled to deliver water on the hilltop where there is no water. 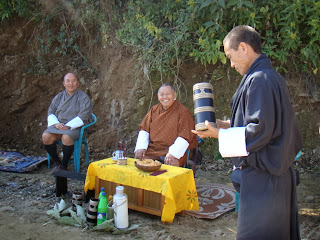 On our way, many villagers came to receive Lyonpo. The one with the wine Palang is one of the gups. He is not only talkative but also active. Lyonpo asked him to do Changchoe. 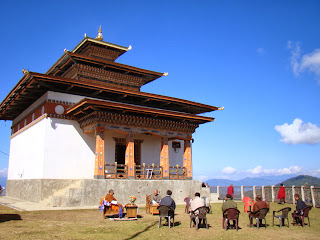 This is Khawar Lhakhang. It is on the top of a mountain. When you reach there, all other mountains that surrounds appear so low. You feel as if you are in the sky. 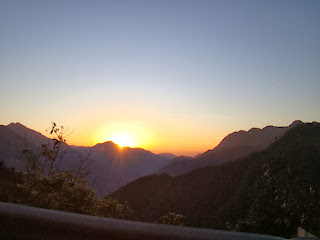 On our way to Samdrup Jongkhar, I was trying to capture the morning sun rise. Being in a moving car, I had to really tighten my nerves of hand. 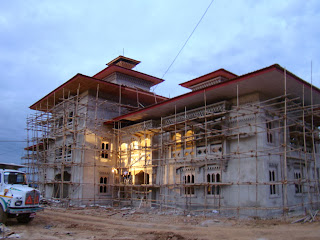 This is Tsirang District Court. It is near completion. The painting is going on. 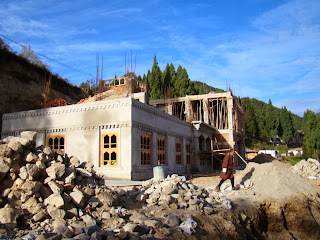 Dagana is one of the remotest places of Bhutan. This court is built with the vision to cater judicial services to the people there.
Posted by Tempa Gyeltshen at 11:19:00 PM 3 comments

Tempa Gyeltshen
I am outwardly uneventful but inwardly dedicated.

if you want to post your articles in my blog, write to me at:

VISITORS FROM AROUND THE WORLD